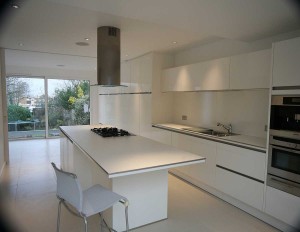 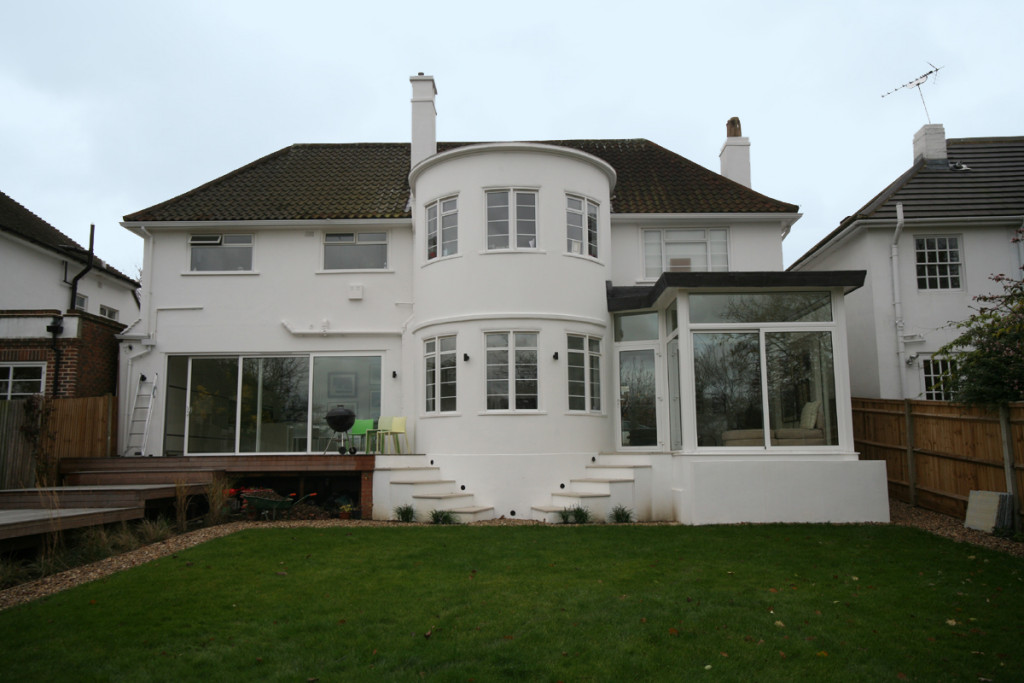 The German/American client wanted to modernise their mid of the century heavily influenced Art deco detached house and transform it into a contemporary style house with an open plan ground floor living area and large openings onto the front & rear garden.

In particular the Ground floor had a traditional layout with a number of separate small living rooms, rear kitchen and two unused garages at front.

The access to both rear and front garden was very restricted via a small kitchen door and an old rear unheated conservatory. The two garages at the front precluded access and view from the kitchen to the front garden. The circular Dining room was not very well connected with the kitchen and only used for more formal dining.

The entrance hall had a very small porch and the double entrance doors arrangement rendered the hallway quite dark.

By reclaiming the two garages and introducing large sliding door openings at rear and at front we completely changed the internal layout throughout the ground floor.

The removal of the front door porch, the new timber & glass staircase and the glass blocks toilet extension also greatly improved the appearance at front and created a very light and welcoming entrance.

The kitchen and dining room where then interconnected by a large sliding internal partition and large sliding patio doors gave direct access to the garden via a new timber deck. The existing conservatory was removed and a new integral rear glazed extension added together with a wine cellar.

The existing circular former dining room was transformed in a TV/media room. The garden access was also improved by two sets of symmetrical circular steps.

The large, central reception hall, with its wall of book shelves, give access to the formal reception room which has views over both the front and rear gardens.

The kitchen/breakfast room has a sleek, fitted, German kitchen and sliding glass doors out to the gardens. The client’s wish to have most of finishes simply in white was surprisingly effective and resulted in a very sleek interior which suited well the Art Deco hint within the original house.